In its 3500 year history, from the descent of the Dorians to this day, Nafpaktos and the greater region have always played an important role in history as well as in culture. The founding of the ancient city is lost in the centuries, where it is hard to identify where myth ends and history begins.

The statue of Nike (victory) that was sculptured by Paionios of Mendi in Chalkidiki, was a dedication of the Nafpaktians and the Messenians after their victory over the Spartans in Sfaktiria in 421 B.C. It is considered to be a masterpiece of ancient Greek sculpture. The monumental statue is 10.92 meters tall and it represents the winged goddess, ethereal, radiant and full of life as she’s coming down of mount Olympus to announce the victory of the two allies. The thin cloak clings to her body thus one can see the perfect shaping of her body. It is the first time in the history of Greek sculpture where the illusion of flying is depicted. The wings, the cape as well as the face of the statue have been destroyed. The statue of Nike was found in 1875 in Olympia after archaeological excavations and it is exposed in the Olympia museum.

In the end of the 12th century B.C. the coastal city becomes affiliated with the Iraklidians (Dorians). It was in Nafpaktos where the Iraklidians built their ships to cross over to Peloponissos.

Nafpaktos’ strategic position in the Corinthian Gulf was the reason that made it “the apple of discord” among the powerful throughout history.

Ancient writings give us evidence that Nafpaktos was the centre of the dispute of ancient Greece and played a significant role in the Aetolian confederacy. Lokri, Athenians, Messenians, Achaeans, Thebans, Macedonians and Aetolians alternate in the city’s leadership throughout centuries.

During the Roman period Aetolia went into decline and there aren’t any records of Nafpaktos’ status for this period. Nevertheless, archaeological findings reveal a fully organized city with public roads and private buildings all built during the Roman era within the city centre close to where the 1st elementary school is today located.

In the post Christian centuries, due to barbaric invasions (Visigoths, Huns, Normans, Slavs, Syracusan, Bulgarians and others); disasters such as earthquakes and others, Nafpaktos passed to obscurity for many centuries.

The city bounced back dynamically into the spotlight after 1204, when it was a part of the Principality of Epirus. During this time the archbishop of Nafpaktos later archbishop of Arta, Ioannis Apokafkos (1204-1232) played a significant role in the ecclesiastic and political history of the Principality. In 1407 Nafpaktos was conquered by the Venetians, and met a period of embellishment and prosperity; it became a commercial centre that competed Patra’s commercial motion. During this period the castle was restored and took on the form we see today. 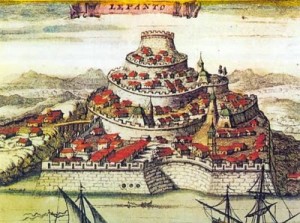 After the Venetians it was Ottoman Empire’s turn to rule the Balkans. After repeated attacks from the Turks the city surrendered to Soultan Vagiazit II in 1499. For the protection of Nafpaktos the Turks built two forts at the entrance of the Corinthian gulf, Rio and Antirrio, called the “small Dardanellians”.

The constant expansion of the Ottomans forced the leaders of the European countries to unite in order to face the threat. After continual effort, Pope Pius V succeeded in creating the Holy League (Sacra Liga Antiturca). Spain, Venice, Rome, Savoy, Malta and some other Italian states gathered to a sacred crusade to cut off the Ottomans’ expansion.

The Christian fleet with Don Juan Prince of Spain, the King’s brother as fleet admiral and the Ottoman fleet with Moezin Zante Ali Pasha as fleet admiral had an incredible naval battle on October7, 1571 on the outfall of the Achelous River near Echinades that remained in history as the Battle of Lepanto. The victory of the Christian fleet was a milestone for the further course of Western civilization. After the battle many pirates from the Mediterranean gathered in the area turning Nafpaktos into a “small Algiers”.

In 1687 the Venetian Morozini along with the Austrian allies took Nafpaktos from the Turks and turned her over to the Venetians. A second small period of Venetian rule followed (1687-1701). In 1701 Nafpaktos was surrendered to the Turks again according to the Treaty of Karlowitz and was enslaved until April 1829.

When the Greek revolution broke out in 1821 Nafpaktos became a Turkish military base because of its strong fortifications. This is the reason why Nafpaktos was freed in the last year of the revolution. On April 18, 1829 as the Turks and Albanians were unable to withstand the siege they surrendered Nafpaktos to the Greek governor Ioannis Kapodistrias.

After its release, Augustine Kapodistrias brother of Governor Kapodistrias as deputy governor and the administrative, military and political authorities of the province and the city developed significant activity and settled the administrative and military organization. The 5th National Assembly in 1832 decided granting of homes and national land to approximately 500 families from Epirus and Souli. With these foundations Nafpaktos and the surrounding area came into a period of free life in the newly founded Greek State offering services to the subsequent national liberation and social fights of the Greek State.