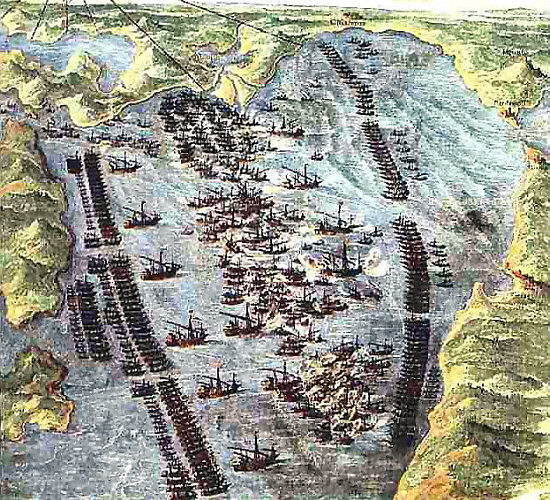 In 1570, after a series of military successes the Ottomans ruled in the Mediterranean. The threat was now becoming more and more evident for Europe.The Ottomans did not constitute just a religious but also territorial and commercial threat. Most Western Europe countries had great commercial activity. Therefore, an expansion of the Ottomans to their territory, would limit, if disappear their commerce. Furthermore, the Turkish atrocities aggravated not only leaders, but also the people of Europe.

Under these circumstances, and with the initiative of Pope Pius V, a military alliance was formed between the Christian states: Sacra Liga Antiturca. Participants of this alliance were Spain, Venice, Rome, Savoy, Genoa and the Knights of St. John.

On September 16, 1571 the fleet of Sacra Liga set out from Messina, Italy to the east. The Austrian Don Juan, brother of Philip II King of Spain was appointed as the united Christian fleet’s commander. Co-chiefs were Mark Antony Kolonna, General of the Papik fleet; Duke Sebastiano Venier the Admiral of the Venetian fleet; Jan Antrea Daria as commander to the right wing of the fleet; Avgostino Barbarigo, and Marko Gourini.

The Battle took place in the gulf of Nafpaktos. It was catastrophic for the Ottomans as only 35 of their 80 ships were saved and 20,000 men were killed. Losses, on the other side, for Europe were much smaller. This naval battle cost most lives to the Greeks, as both fleets European and Ottoman had Greek rowers on their ships. 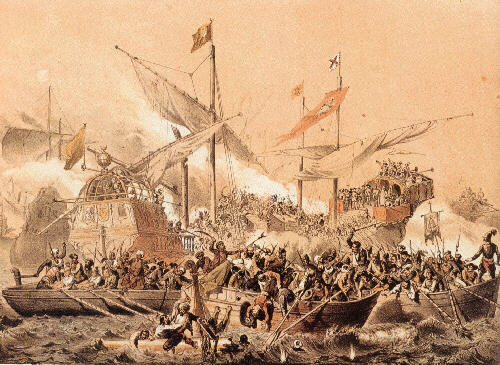 The famous Spanish author Miguel de Cervantes was the Commander of “Marquise” and lost his hand in the same battle. A cultural park with a statue of Miguel de Cervantes and memorial marble inscriptions is located at the west side of the Venetian port of Nafpaktos.

Botsari Tower is also located on the North side of the Venetian Port. The Tower was built in two phases; the western tower was built during the 15th century and the eastern tower during the 16th century. Botsari Tower was many times the residence of the local governors. In the eastern part of the tower houses a permanent exhibition regarding the Lepanto Battle. The exhibition includes approximately 80 replica paintings or engraving works made by the greatest artists of that time.

In Barcelona’s naval museum there is an exact replica (full dimension) of Don Juan’s galley along with his original banner and also the statue of Christo di Lepanto. An illustration of Virgin Mary, the flagship of Sebastieno Venier is also housed in Venice, in Santa Maria Formoza church, near St. Marcus Basilica.

Due to their common history, Nafpaktos is a twin town of Pontevedra of the Galic province in Spain since 1982 and Marino, Prefecture of Rome since 2004. 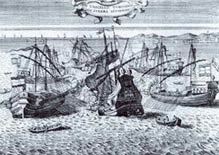 Marc Antony Kolonna, a lieutenant of the Sacra Liga was from Marino. The re-enactment of Colonna‘s return to the city from Battle is the greatest holiday of Marino. During the re-enactment, dozens of cavalrymen dressed in renaissance costumes, parade in the main street of the city. This event takes place on the first Sunday of October, the day during which the naval battle is also celebrated in all of Western Europe. The re-enactment of Kolonna’s return is celebrated along with the wine festival (Malvasia) during which wine flows from the public water faucets on the main street of the city. Furthermore, every October, the municipality of Marino in honour of this significant historical event organizes events and the re-enactment of the naval battle in the small Venetian port.

Although the news of catastrophe may have paralyzed the Sultan at the time, it was a victory without morrow for the west as they didn’t take advantage of it as they should have. Besides that, a period of slaughtering and capturing was starting the Greek population. In any case it was the first time that the winning streak of the Turkish armada was broken. Admiral Gravie wrote: Fate of the world, become three times depended on the outcome of a huge naval conflict: Salamis, Aktion and Nafpaktos.